Dmytro Shtohryn, librarian, initiator of Ukrainian studies at the University of Illinois at Urbana-Champaign, 95 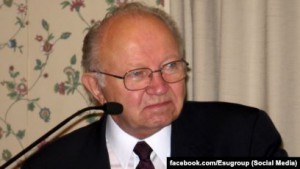 Despite all the national disasters of the 20th century, Ukrainian intellectual life has never been interrupted. On the contrary, it has always yielded more and more new examples of excellence in extremely unfavorable circumstances, not only under German Nazi and Russian Communist occupation regimes, but also throughout modern Ukrainian history.

The life path of Dmytro Shtohryn, a professor of literature, bibliographer and public figure, was representative of the history of his motherland. He was born on November 9, 1923, in village of Zvyniach in the Chortkiv region of Ternopil Oblast, into the patriotic family of Mykhailo and Kateryna (a descendant of the Figol family) Shtohryn, who were in charge of a Ukrainian Insurgent Army “kryivka” (a secret hiding place) during World War II.

He began his education in Chortkiv High School. His further planned studies in the city of Peremyshl were disrupted by the war, as a result of which he wound up in displaced persons camps in Germany. In 1946, he entered the Ukrainian Free University, first studying in Augsburg and then in Munich. Mr. Shtohryn contributed to the development of Plast Ukrainian Scouting Organization, the Ukrainian Youth Association and the Ukrainian Student Association of Mykola Mikhnovskyi in the Ukrainian diaspora.

After immigrating to Canada, Mr. Shtohryn obtained degrees in literature and library studies from Ottawa University in 1959. His dissertation research was dedicated to the literary works of Oleh Kandyba-Olzhych and Pavlo Fylypovych. In Winnipeg in 1955, he married Eustachia Barwinsky. It was a lifelong love. The couple had two children, Bohdar Oleh and Liudoslava Vira.

In 1960, the young couple moved to Urbana-Champaign in Illinois and became established there. Prof. Shtohryn became a lecturer of Ukrainian studies and one of the administrators of the University of Illinois Ukrainian Library. He was in charge of the Slavic book collections, including Ukrainian books. Due to his efforts, the Slavic Book Collection of the University of Illinois, along with the Library of Congress and the Harvard University Library, are the largest in the United States. In 1995, Dmytro and Eustachia Shtohryn established an endowment in their name to support the Ukrainian book collection.

On his initiative, the Department of Ukrainian Studies was opened at the University of Illinois. In 1980, Prof. Shtohryn headed the Ukrainian Research Program. Two years later, he initiated the annual research conferences in Ukrainian studies that took place each year from 1982 to 2009. These conferences became the largest intellectual forum for the Ukrainian diaspora around the globe. Since the late 1980s, Ukrainian researchers also started to regularly visit Urbana-Champaign.

The polemical context of Prof. Shtohryn’s annual conferences, ongoing lively discussions and exchanges of thoughts and ideas were vitally important for Ukrainian intellectual life. The meetings focused on different topics: the participants discussed the future of Ukraine and the Ukrainian diaspora, presented the results of sociological research, discussed various issues of Ukrainian academic and political life, as well as topics of history, literature, the arts and economy. At one of these conferences, Viacheslav Briukhovetsky presented his project to revive the Kyiv Mohyla Academy, which was later successfully implemented and today is the National University of Kyiv Mohyla Academy.

This writer first met Prof. Shtohryn in 1995, when he lectured at the Ukrainian Free University in Munich. Prof. Shtohryn quickly became closer to people owing to his sincere personal involvement. We immediately began to communicate not only as a student and professor, but also as people who want to change something in this life.

In particular, we collaborated on the journal Ukrainian Problems (1991-2003), founded by the late Zinoviy Krasivsky. To support the journal, Prof. Shtohryn engaged Ukrainian scholars from the United States and Canada. In parallel, Prof. Shtohryn co-founded the Center for Liberation Movement Studies headed by Volodymyr Viatrovych.

In the 2018-2019 academic year, his daughter, Liudoslava (Liuda) Shtohryn, established the Dmytro Shtohryn Endowment at the Department of Slavic Languages and Literatures at the University of Illinois at Urbana-Champaign to support Ukrainian studies.

He authored and edited six books and some 100 articles in English, Ukrainian and German. One of his most important books was published in 1975, the compendium “Ukrainians in North America: A biographical directory of noteworthy men and women of Ukrainian origin in the United States and Canada.”

I saw Prof. Shtohryn for the last time in the summer of 2018. With him and his wife, we discussed many plans, including publication of a collection of selected materials from his annual Ukrainian studies conferences at Urbana-Champaign. This collection will be published in two volumes in 2020 by the Kyiv Mohyla Academy Publishing House.

We remember Dmytro Shtohryn as a librarian and literary scholar, professor and honored member of the Organization of Ukrainian Nationalists (OUN). Prof. Shtohryn liked to emphasize that his profession and mission was to be a librarian. That is why Prof. Shtohryn will forever remain in our memory as a great supporter of intellectual life and as the librarian of the Ukrainian movement.

Serhiy Kvit, former president of Kyiv-Mohyla Academy (2007-2014) and former minister of education and science of Ukraine (2014-2016), was a student of Prof. Dmytro Shtohryn.